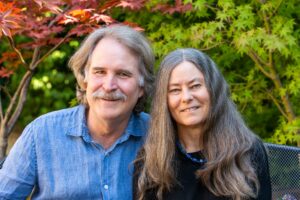 What Your Food Ate, How to Heal Our Land And Reclaim Our Health (W.W. Norton & Company, New York, NY 2022), the new book by David Montgomery and Anne Biklé, is so self-explanatory that there’s not much left to say to them, aside from You must have put a hell of a lot of work into this and Do you think it’ll help? But I caught up with the busy authors, who are married, by phone at their Seattle-area home, and spent a pleasant half-hour in conversation.

“It’s an inspirational and depressing book,” I suggested, noting that I had reviewed their earlier books, The Hidden Half of Nature and Growing a Revolution. I was somewhat prepared for the journey described in What Your Food Ate from deep inside the soil to deep inside your body, following the path of vital micronutrients. But this is a carefully reasoned study, supported by source material that spills from the back of the back over to the book’s website.

“We read a ton of stuff, literally,” says David. “There are about a thousand articles that were source material. And for the final version of the book, we decided to put that material online. There was a lot of homework that went into this. I think you can understand why. In contrast to the other two books you mentioned, we believed that this book really had to be underpinned with documentation of how we arrived at these ideas and how we arrived at what we’re saying. Because the ideas and the information in this book isn’t going to be flattering to everybody.” Could he be referring to the big chemical fertilizer companies. David laughs. “I’m not sure they’re gonna love this book.”

I noted that the premise of the book makes a lot of sense: Your body knows what it needs. So does the planet, but we’ve been thwarted in both respects. “We have,” he agrees. “We’ve taken such a trip away from that, and all of it motivated by money, it seems. And the fact that we are suffering as much as we do is just not apparent, because it gets to be blamed on other things.”

“My greatest hope for this book,” says Anne, “would be that it could help people see the importance of going beyond just ‘wouldn’t it be great if we could all have organic food,’ and really, truly see why the health of the soil is so important to the land. And so important to us because of how those conditions ripple right through us.”

Anne’s hope for change and repair of American agriculture is succinctly conveyed with a deep understanding of the difficulty for success:

“Organic farming has mostly become a program of don’t do this, don’t do that. And unfortunately, that accommodates farmers who want to call themselves organic even as they push certain kinds of input to the furthest edge so they can get away with things. Which is a recipe for disaster, perversely dis-incentivizing soil health. I’d rather see some kind of certifying body at a regional level, rather than state and certainly nothing as big as national – some unit of a landscape where there’s a certifying body that has a good handle on how would we define soil health here, and if a farmer can implement practices that do things like say, increase the level of organic matter in soils, that can increase microbial diversity, that can decrease the need for supplemental water, all of these things that heal the land and help the soil.”

The range that this book covers is remarkable, traveling from soil microorganisms through plant roots and ultimately into our bodies. It’s a journey the authors have made before, so were there any surprises that resulted from this time through?

“Oh, yes,” says Anne. “One of them was realizing across all fields – crops, animal science, human biology – how variable life is. Which explains why you can’t get perfectly replicated results across all agronomic trials or all human research either. I fear that some will use that to say, ‘It really doesn’t matter how we farm, or what we eat.’ But when you come up a level from the mechanistic details and the biology that we describe in the book, you begin to see that every plant, every animal, every person – as you said, each of them knows what it needs, and all that variability still zeroes in on health, but through different pathways, where there aren’t milepost markers.”

Conventional agriculture, of course, is stuck in a one-size-fits-all approach, trying to regulate animal biology through breeding programs and plant biology by applying the same amount of nitrogen everywhere. “But,” Anne insists, “the best organic farmers out here understand that variability. They’re seeking to understand how all of this is working, and they’re harnessing it in a way that allows them to be farmers to have a livelihood, and not wreck the planet in the process.

“I think of a term that’s often used in human medicine, which is that we need evidence-based medicine. It’s how we know vaccines work. And there’s evidence for the treatments for various maladies. So what’s shocking to me is that many people think that evidence-based practices in agriculture is wanting, because to me, the evidence is pretty clear. The soil micro-biome needs to be able to function normally and robustly, otherwise crops aren’t able to do all the things they need to do to maintain their health. And that ripples right through to animals and to us.”

The notion of variability goes right back to the beginnings of the evolution of plants and animals, developing symbiotic relationships from the start. As Anne explains, “When you think about evolution in terms of the big challenges today with climate change, you’re never going to get to adaptive systems in individual plants or animals without that variability. This of course speaks to my bias as a biologist. Evolution is what drives life. Some people look at domesticated plants and animals and think, oh, evolution can’t be happening there – and yet it is. There’s a lot of variability in crop breeding and animal breeding, and we would do so much better if we looked to capitalize on that instead of tweaking genes and so on.”

Given the well-publicized failures of many farmers, who too often end up deeply in debt to their suppliers, it would seem that there could be a financial incentive to following the more ecologically conscientious approach the book describes.

David confirms this: “There’s a way of farming – regenerative farming – that can be profitable, because we’re using fewer inputs to grow comparable amounts of food. And if the land ends up in better shape as a result of that, because we’re using less fertilizer and less diesel, the impacts on the environment in terms of pollution and climate change are mitigated. And if it grows more healthful food for people, where is the downside? It only comes if you’re in the business of selling those inputs to the farmers.”

“And what is there to complain about,” echoes Anne, “if we can heal the land and reclaim our health through changing agriculture? Once you start to do it right, there’s a cascade of consequences that improve people’s lives and the land – so why would we not do this? It’s because there are powerful forces against it, that’s why. But it’s something we can do and have no regrets here.”

If it seems as if there’s a stubborn, well-entrenched system to fight, David believes that the insights this book provides can be effective tools. “Something I’ve learned along the way  is how some of the myths of modern agriculture really are myths. The so-called yield gap is pretty small if you do all the kinds of things we’re talking about here, and not just doing no-till and not just doing cover crops, not just rotating crops. It can be hard to wrap one’s mind around the idea of a whole new system of farming, especially in the research world. There’s nowhere near enough high-quality research out there studying these things at the systems level. We tend to break it into the individual pieces of ‘what could a master’s or PhD student do in a couple years?’ Because that’s how long the grant lasts.”

“I think it’s easier to learn the technical stuff when it’s filtered through the story of individuals,”  David continues, “whether in the past or today. We put a lot of work into trying to figure out how to tell these stories so that it’s not too dry. But with a thousand references behind it. Farmers might not ’fess up to it, but they definitely study what their neighboring farmers are doing. And if a neighbor is having success, the farmer will wonder, How did they get there? Could I do something like that on my farm?”