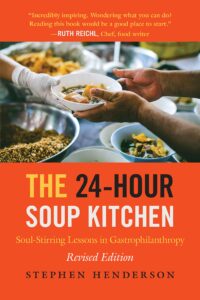 Stung with an attack of middle-class guilt, Stephen Henderson sought to expiate by helping to cook meals at a variety of soup kitchens around the world. Bringing a home-gourmet sensibility to these excursions, when placed in charge he designed menus not necessarily conducive to catering or soup-kitchen tastes, so his home-cooking-based efforts tended to throw him into high-pressure on-the-job training. But as his catering-kitchen skills grew, so did his self-awareness. And he tells his stories so endearingly that The 24-Hour Soup Kitchen, Soul Stirring Lessons in Gastrophilanthropy (Radius Book Group, New York, New York 2021) will win your heart. It’s an entertaining and enlightening book.

The genesis is straightforward enough. Henderson is a travel writer who likes to cook. He’s living well enough to acquire an aging co-op in New York City. It needs a new kitchen. So he buys a new stove, a top-of-the-line Lacanche. He’s too tasteful to mention a price, but those ranges run at least $10,000 today. Henderson visits the manufacturing facility in France, and, while dining with its director, learns about Alexis Soyer, a famous chef during the 19th century, a man renowned both for his lavish way of life and his invention of the soup-kitchen concept.

It’s a concept that seems more necessary than ever, and Soyer’s life (and lingering Lacanche guilt) inspired Henderson to travel around the world to a variety of soup kitchens, large and small, and learn about them by working at them.

Henderson’s odyssey begins at Gurdwara Bangla Sahib, a massive Sikh temple in Delhi that grew from a 17th-century bungalow to the large, ornate structure you’ll find today. He was there to help with langar, a tradition among Sufi Muslims that offers food, served in a communal dining area, to anyone of any religion who wishes to partake. Gurdwara Bangla Sahib feeds about 20,000 people a day, 600 at a time, and those who work or eat there are required to do so barefoot. Biswajit Singh, the only paid employee at the kitchen, organizes the prep and cooking with no foreknowledge of the supplies he’d be working with – they are donations that arrive based on the whim of the benefactor, such as a flatbed truck loaded with cauliflower.

“Not only did food appear spontaneously,” writes Henderson, “but everyone who would now unload the truck of cauliflower, cut it up, cook, serve, and wash the plates it was put on were volunteers who arrived on their own capricious schedule. There was no ‘org’ chart, no directory of staff. Every person – now including me – who was working in this kitchen just decided today, ‘I guess it is time to spend an hour or two over at the langar.’”

Henderson spent five days working there, and each day, “from 8:00 am to 10:00 pm, I worked harder physically than just about any other time in my life.” He enjoyed the reward of helping people in need, but became a bit too caught up in it. “Gradually, I began to allow myself the occasional human touch. I would squeeze an old woman’s shoulder encouragingly or tickle a child’s ear. I hoped this made the whole interchange more compassionate.” Until another volunteer pointed out, “‘Many of these people have cholera, leprosy, tuberculosis, or something far worse. And have you even considered that you, too, might have germs you could pass on to them?’”

None of the forays that follow is quite as tumultuous, but you’ll feel the gradual accumulation of similar lessons about charitable behavior. At Pittsburgh’s Jubilee Soup Kitchen, Henderson meets its founder, Sister Liguori Rossner, who explains that she raised the money to build the place through begging. This was in the 1970s, and she brazenly called on the corporate executives in the city. She was still wearing a habit, she explained, and Pittsburgh was a Catholic town. Thus was she able to build the soup kitchen, which opened in 1979. These days it sports a day care center, job placement office, health-care services, and a prison ministry in addition to the kitchen that feeds about 150 at lunchtime. Toward the end of Henderson’s stay in that kitchen, he offered to make a vegetarian curry, but was talked into at least making it with chicken. (“‘Our people like meat.’”) And it overcame an initial hostility to become a success.

Subsequent trips to Pittsburgh took him to the East End Cooperative Ministry, where his spaghetti Bolognese was so-so, but a preparation of Mexican pot roast was successful enough to be termed by one guest as “‘better than sex.’”  Los Angeles Youth Network, on the other hand, proved far more challenging. It’s a network of shelters that take in adolescents, “many of whom were kicked out of their childhood homes because they are gay.” He received a specific request from the West Hollywood group house, where one of the clients asked for chiles rellenos. It’s a labor-intensive dish, but nothing seems to rally Henderson more.

When he arrived with the food, the person who’d requested it wasn’t there and none of the others in residence could be bothered to turn down the ear-shattering TV. How he coaxed one, and then another, and then the rest into sampling his fare is one of the lessons at the heart of this book – about framing one’s personal involvement to the situation, and how that involvement can make all the difference. This also came home at Seattle’s Recovery Café, where Henderson worked alongside a fascinating array of people living on the fringes, people with their own lessons to impart.

At the Midnight Mission in Los Angeles, over a thousand people are served breakfast, lunch, and dinner each day, meals prepared and served by people enrolled in rehab programs. Executive chef Rob Rice has to deal with the health problems he sees in those trying to kick their habits. “He’s seen enough to recognize advanced cases of hepatitis C, for instance, where a person’s liver stops functioning. ‘Any time a person’s skin is light green, that’s not good,’ he said.”

Obtaining raw material is a challenge at any of these places, but even more challenging at Midnight Mission was persuading the clientele to eat the relatively healthy fare that Rice prepares. “‘Most of our clientele? You show them a cucumber and a zucchini, side by side, they won’t know the difference. They’ve been raised on fast food, and when I say ‘raised,’ I mean eating at McDonald’s every day practically their whole life.’”

Henderson found gastrophilanthropy in unexpected places. Elkhart, Indiana’s Recreational Vehicle Hall of Fame Museum moved to a larger building in 2007 and its former home became the Faith Mission of Elkhart. Ironically, the mission now finds itself helping many who lost jobs as Elkhart’s RV manufacturers merged amidst slumping sales. Faith Mission houses and feeds 135 people at a time, while the Austin, Texas-based Mobile Loaves & Fishes, a fleet of catering trucks, serves that city’s homeless right there on the streets.

Busan Baffer, in South Korea, feeds about 3,000 people a day. Shon Gyu-Ho, its founder, notes, “‘The reason homeless people have trouble interacting with society is they think they’re weak. We try to help people know they can do something with their lives.’” This was one of the places where Henderson learned about the local cuisine and its preparation alongside the lessons of the plight of the homeless in this particular society.

He explored a dynamic gumbo preparation at Terra Blues, a club on Manhattan’s Bleecker Street. This particular evening, the club enhanced its usual fare of blue music with a performance by Sauce Boss – chef-guitarist Bill Wharton, who prepares a meal even as he performs with his trio. In Manhattan, the audience was sparse and the response seemed tepid, but Henderson witnessed the same performance at a Buffalo-based soup kitchen, where the response was much more enthusiastic.

The apotheosis of Henderson’s gastrophilanthropy travels took place in Uzbekistan, where he was introduced to a practice steeped in religious tradition that requires its practitioner to select and slaughter an animal, which is then butchered, dressed, and cooked. Although there was someone on hand to perform the execution for him, Henderson witnessed it and the subsequent processing of the carcass. It’s presented in excruciating detail. And the resultant meat, mixed with 60 pounds of rice and an assortment of garlic, carrots, and peppers, became a satisfying meal for the line of hungry people who assembled to be fed.

These are but a few of the many visits he made to try his hand at a form of cooking completely different from what you do at home. And eating: he tasted guinea pig in Peru and incredibly spicy kimchee in Korea. He worked alongside a staff of convicted criminals at a kosher restaurant in Tel Aviv that feeds up to 250 people a day and charges nothing. And everywhere he went, he was struck by the gulf between those who can afford to donate supplies and those who have nothing else to eat. Even close to his home, as the pandemic unrolled, he found the opportunity to cook at the Salvation Army Community Center in Hudson, NY, where his chicken curry again was a success. And you’ll find a scaled-down recipe for it – and many of the other items mentioned – at the end of the book. Which is good: you’ll be hungry by the time you get there. But you’ll certainly think about sharing that food.