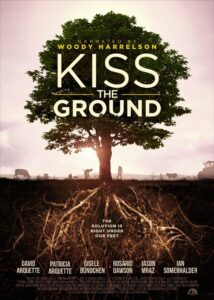 We’re feeling the horrible effects of a global climate crisis. We’re wracked with guilt over the lousy food we consume – or we should be. There are solutions, but how do you persuade the public to change its ways?

Get celebrities to give those answers. Or so believe filmmakers Joshua Tickell and Rebecca Harrell Tickell. Their engaging documentary Kiss the Ground boasts a host of celebrity actors and musicians, beginning with narrator Woody Harrelson, who also has a small but significant on-screen presence. Does Patricia Arquette’s enthusiastic encomium for composting toilets prove persuasive? Does a song by Jason Mraz help make up your mind? Is a word from recent Super Bowl-winning quarterback Tom Brady enough?

If it works, great. But the true celebrities here are those who are out in the fields, farming and teaching other farmers. The message of Kiss the Ground is simple: We’re destroying our land with industrial farming methods, and when you destroy soil, you create an inhospitable climate.

Ray Archuleta is a Certified Professional Soil Scientist with the Soil Science Society of America. He spent over thirty years with the Natural Resources Conservation Service (NRCS), and then founded Understanding Ag, LLC, to teach strategies for soil improvement on a national scale. He also founded Soil Health Academy to share regenerative agriculture principles.

“Erosion is when the soil becomes dirt,” Archuleta explains, displaying the difference between healthy soil and the nutrient-free desert that results from tilling and noxious chemicals. But we get more than mere explanation here, because this movie emphasizes its points with plenty of animated graphics – somewhat to a distracting degree.  But the prevailing message is the need for biosequestration, which allows biological processes to capture and store the atmosphere’s excess carbon dioxide.

Along with Archuleta, whom we see giving a succession of presentations, one of the heroes of this documentary is Gabe Brown, a rancher in Bismark, North Dakota. He offers a compelling explanation of what brought him to responsible farming: hail and drought. He was wiped out by hail in 1995 and 1996, then a massive drought took out 1997’s income. And then it was hail again the following year. This led him to study soil ecosystems. Among the many unpleasant facts he learned was that, with the development of the plow, by 1934 200 million acres of farmland had been permanently damaged. He now uses a no-till drill on his tractor to grow back the topsoil he needs, because soil that’s not tilled retains more water. “Every one-percent increase in organic matter in the soil means you’re adding ten tons of carbon per acre,” he explains. “The message is simple. Getting it out is the problem.”

He, too, makes presentations to other farmers, although he saves one type of presentation for the cameras: comparing an egg from a “free-range” hen to one from a hen that is allowed to graze and roam much farther than the commercial so-called free-range systems allow. Specifically, he compares the yolks, noting how much firmer and more deeply colored is the one from the unconfined bird.

Among other farmers following regenerative practices are Doniga & Erik Markegard, ranchers in California’s coastal Half Moon Bay, where cattle graze throughout their 8,000 acres in a carefully managed program that allows a patch of grazed ground to lie fallow long enough to regrow its grasses. As Doniga explains (and animated graphics illustrate), the cattle chew off the grass tops, the roots below slough off, and the resulting mix of micro-organisms and decay turns that soil into humus.

Dr. Kristin Nichols, the chief scientist for three years at the Rodale Institute, looks at the philosophical shift that has occurred, so that instead of understanding natural protocols, we have transferred our faith into chemicals.

The most notorious of them being glyphosate, better known as Roundup, the carcinogen that Monsanto so aggressively pushed onto farmland (and, as a result, into our waterways, and into our bodies). This chemical gets not much more than a nod in Kiss the Ground, but it’s contextualized in the larger saga of a chemical-fertilizer industry that had its roots in the work of German chemist Fritz Haber, a Nobel Prize-winner whose World War I-era inventions helped poison the enemy, and whose synthetic nitrogen fertilizer continues to poison the ground.

We’re reminded that three pounds of toxic chemicals are spread each year for every American, and that these chemicals have been linked to ADD in kids, pediatric cancers, and birth defects.

Allan Savory is a hero of the regenerative farming movement, and we see him giving a talk on desertification, the process by which plowed and chemically altered ground dries into dust. This also changes an area’s micro-climate, pushing rain clouds away and disrupting water cycles, which only hastens the process. And it’s the reason two-thirds of the world is desertifying.

Savory also is seen in his more natural habitat, at his farm in Zimbabwe, chatting with actor Ian Somerhalder about the need for livestock to be part of the regenerative process. (This has sparked criticism of the movie from the plant-diet-only folks, who have posted some passionate reviews that are more emotionally than scientifically driven.)

Another very outspoken proponent of regenerative practices featured here is Paul Hawken, editor of the essay collection Drawdown, an impressively comprehensive plan for reversing global warming, here offering yet another perspective on the biosequestration challenge. “Reducing emissions is not enough,” he observes. We need drawdown. “Heal the soil, heal the climate.” Project Drawdown, founded by Hawken, now works with over two hundred scholars, students, scientists, researchers, and activists to map, measure, and model the one hundred most substantive solutions that can cumulatively reverse global warming.

The feasibility of regenerative farming practices is exemplified by one of the most far-reaching of such projects, the reforestation of China’s Loess Plateau. It’s 14,000 square miles, explains ecologist John D. Liu, “and it’s the most eroded place on Earth.” A thriving food source in ancient times, it was desertified by destructive farming practices. But Liu, who spent many years as a journalist before founding the Environmental Education Media Project, put together a team that spent 15 years – from 1994 to 2009 – successful reclaiming that area. “If we restore all the degraded land on Earth,” he says, “we can return to paradise.”

We visit San Francisco, where mandatory recycling began in 2009, including a large-scale product to collect and compost food waste. And in Haiti, there’s a thermophilic composting project that turns human waste (yes, that kind of waste) into compost, a program being encouraged by Arquette, shown on-site to encourage the local residents.

The politics of climate change remain depressing, as evidenced by the 2015 United Nations Climate Change Conference or COP 21 Summit held in Paris, France. Onetime French Minister of Agriculture – and ongoing activist – Stéphane Le Foll notes that India, China, and the U.S. – the worst environmental polluters – were no-shows at that initial conference, and the U.S. under the Trump Administration completely separated itself from the resultant accord, a policy fortunately reversed by President Biden.

Although this documentary shamelessly cozies up to an audience that needs celebrities to show them the way, and caters to the short-attention-span contingent with animations and speeded-up scenes of plant growth, if that helps spread the word than so be it. We’re fighting a deeply entrenched system in which growers of corn, soy, and hay get a $25 billion annual tax subsidy. As Brown puts it, “The Federal farm program we have today is the most detrimental to regeneration.”

We’ve already lost a third of the Earth’s topsoil. Says Archuleta, “We have an education issue. Producers don’t understand how soil works.” Let’s hope this documentary helps to change that.