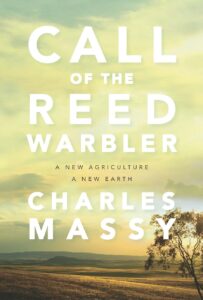 Your view of the earth may be immediately subverted by this book: most of it takes place in Australia, where the seasons are inverted and the land is often desert. But this turns out to be an excellent location from which to contemplate the renewal of the land. Moreover, Call of the Reed Warbler, A New Agriculture, A New Earth by Charles Massy (Chelsea Green Publishing, White River Junction, Vermont, 2018) is a message of hope that the regenerative agriculture movement has the potential to renew not only the land but human society and health as well.

Charles Massy went from being what’s considered a traditional farmer – applying chemicals while chasing after scarce water – to one who looked to the land itself for clues about its restoration. In his long, detailed, finely written book, Massy takes us through various processes of regeneration. He lays the groundwork at the book’s beginning: When a healthy agriculture puts more long-lasting carbon into the soil while minimising the loss of such carbon, this in turn has a major impact on the water cycle and its crucial role in thermoregulation (i.e., climate control) of our planet.

And it’s not just the condition of the land that he considers. It’s also human health, which is being sapped, he explains, by four factors: the fat-rich modern diet, its nutritional scarcity, its cancerous assimilation of glyphosate, and the cumulative effect upon genetics. What makes this quartet of factors so deadly is that we are genetically hard-wired to live off our natural environment … while we can’t change this genetic wiring, we can change our landscapes, and thus the food and water that they supply.

Australia’s landscape has been evolving for nearly four billion years, the last forty million (or so) of which it was as an independent continent, and became home to its own unique biodiversity. All of which changed after 1788, when the British arrived with their own brand of domesticated agriculture, completely unsuited to the antipodean landscape. It was a clash between a modernising, dominating Mechanical mind and an adaptive, ancient Organic mind. Destruction of the land and its native inhabitants went hand in hand.

Massy argues, with well-presented justification, that any landscape evolves in a fertile, harmonious fashion, and what’s needed now is a rediscovery of what the land and its earliest stewards have long known. And it should be centered around five crucial landscape functions: solar energy (by increasing green plantings), water (by increasing infiltration and retention), the soil-mineral cycle (creating healthy soils with rich biodiversity), dynamic ecosystems (promoting biodiversity and health), and the human-social aspect, which puts us to working effectively with natural systems.

A visit to sheep farmer Tim Wright’s farm near Uralla, New South Wales, revealed a system of grazing that involved the use of small paddocks and enough rotation to allow significant parcels of land to rest long enough to regenerate its greens after the sheep traffic broke up the soil and left behind nutrients. After years of struggling with conventional farming, Wright became a convert to Allan Savory’s system of holistic planned grazing. Savory’s name, like that of Wendell Berry, appears throughout the book – the Zimbabwe-based farmer and thinker has developed some very influential practices, and a visit to the Savory ranch – led by a barefoot Allan, as he prefers to be in full contact with the soil – proves that such grazing techniques are effective in the driest of landscapes.

Water seems so abundant but also so integral to life that we take it for granted, writes Massy, and his search for effective water management begins at a farm outside of Sydney, where, in the 1940s, P.A. Yeomans put into practice an approach that, according to his son, Allan, had unfortunately originated with the agriculturally illogical practices ‘invented’ by the United States Corps of Engineers, guided and advised by US Army construction officers’ in the wake of the 1930s American dust bowl. It was engineering-based thinking that took no account of landscape function, more about limiting damage than regenerating resources – which, of course, did even more damage.

Seeing that water remained a problem, Yeomans decided that a landscape-conscious use of it could be the solution. He eventually turned his farm into a model of healthy soil that suffered no lack of water in the driest of seasons – all from learning how to slow, save, and divert whatever water became available.

Salinity is another problem that farmers face, and Ron Watkins, in Western Australia, a couple of hundred miles from Perth, found a way to manage it when he took over a failing farm in the 1970s. Years of trial and error led him to the Yeomans system, but he was soon to discover that the soil in his part of the country was striated with underground streams, making it far more complicated to direct the water where it would serve the most good. He developed a system of tiered contour drains to cross those streams, and planted belts of deep-rooted vegetation.

Regenerating the soil-mineral cycle begins with the recognition of soil as a living object. Massy’s own experience was underscored by two university coursework sessions, taken thirty-seven years apart. Nothing had substantially changed the second time, he writes, noting that they were focused on soil chemistry and physics. The most vital ingredient of all was missing: the diversity and dynamism of a healthy soil and its complex, living biota. It’s hard to study, he notes, because it’s a constantly adapting, self-organising system.

He learns from Australian National University microbiologist Walter Jehne (the founder of Healthy Soils Australia) that restoring the world’s living skin requires four steps: green plants capturing the sun’s energy to produce biomass, oxidation of that biomass to release that energy, the absorption of that energy by the soil’s organic matter, and then improved water and nutrient retention to turn plants into food sources.

What works against that are industrial farming methods. Destroying and ploughing soil so as to prepare a seed-bed for another annual ‘weedy’ crop while killing so-called weeds at the same time is a short-term fix with disastrous long-term consequences. Even the advance of direct-drill technology and the advanced use of herbicides has come with a renewed set of risks.

Not surprisingly, Massy’s investigation leads him to Wes Jackson (who has been celebrated many times on this website) of the Land Institute in Kansas and his pursuit of the development of deep-rooted perennial grass grain crops. Such a pursuit resonates with Australia’s distant past, when Aboriginals were able to manage and harvest a giant, continent-wide grain belt. The typically low yield of native grasses is what Jackson is working to counter. Perennials require no destructive tillage and a management system that can combine with holistic grazing.

An exploration of biodynamics is wide-ranging enough to include Goethe and his philosopher-acolyte, Rudolf Steiner, the founder of the first modern organic-farming approach (albeit based upon some fantastic-sounding theories). But we also spend time with Massy’s Canberra-based friends Tobias and Beatrice Koenig, whose 500-acre biodynamic farm is divided between cattle and cash crops, producing produce that deliciously justifies the approach. (In an unfortunate update, the Koenigs and their farm were in the path of a devastating brush fire that swept through in February 2020, destroying their crops – but they survived it with the intent to replant.)

The fourth ingredient of the five-step plan is regenerating dynamic ecosystems, which can be described as a complex community of organisms in any locality that, while being in a state of relative ‘balance’ is nevertheless in constant flux and interaction. Richard and Jenny Weatherly (profiled in a wonderful four-minute You Tube video  that captures their farm’s landscape) are among such practitioners, as demonstrated by their 4,000-acre farm in Victoria’s Western District. They combined a knowledge of the history of their land – what types of vegetation grew on what became arid desert – with an intimate sense of the land itself, thus enabling them to map out a plan of how they believed the land could be restored, a plan they achieved after decades of hard work.

The final ingredient may seem the least attainable. The human-social aspect is a broad category that includes how we relate to the genetic aspects and changes of our plants and animals – and ourselves. Massy’s direct experience in this process came through a failed ram-breeding program, with the eventual realization that such animals are not mechanical boxes we can simply manipulate in the expectation that they will adapt to any and every environment across the country.

The book concludes with the suggestion of an even bigger picture to consider, a matrix that includes those landscape functions and cycles and goes on to comprise the operating influences, constraints, and functions of nature in general. Natural selection and self-organization (getting out of the way of Nature) are among these broader considerations. To flourish within these systems requires a transition from the Mechanical mind (which gave us industrial agricultural) to an Emergent mind.

The one should transition into the other, but, Massy observes, certain elements of the emergent properties of the Mechanical mind have now mutated and become malignant … The Mechanical mind has gone rogue. Adopting an Emergent mind is difficult in the face of so much industrial entrenchment, but, as befits so complicated a challenge, Massy’s book gives us dozens of proven pathways to consider.

Many, many farms are profiled in the course of this book, and Call of the Reed Warbler is a bounty of farm visits and stories and exhaustive research. What may sound like speculation and dreams is backed by hard facts. What may seem at first to be an insurmountable challenge finishes in a glory of hope.