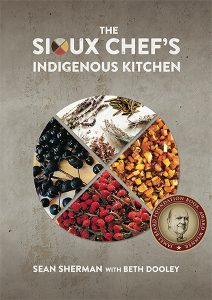 Many are the cookbooks that are underlain by themes or contain winsome backstories, but far less common is a cookbook in which the backstory holds its own with – and imparts meaning to – the recipes. The Sioux Chef’s Indigenous Kitchen by Sean Sherman with Beth Dooley (University of Minnesota Press, Minneapolis, MN 2017) is one.

Sean Sherman, of the Oglala Lakota tribe, spent his childhood in the 1970s on his grandparents’ ranch in the Pine Ridge reservation in South Dakota. The women of the family prepared traditional fare for holidays and celebrations, but for the most part the family was fed by meat or game bagged on the ranch, while the larder was lined with a sad litany of canned vegetables and salmon, along with saltines, white flour and bricks of bright orange commodity cheese, all government-issued. His grandmother tended a little garden but her fresh vegetables were a treat, not the norm.

Sherman recounts his personal voyage from this culinary background to the discovery of the wealth of American indigenous food and how, in the process, he came to understand his heritage in a fuller way. His journey lasted over 10 years and took him through stints as a busboy, dishwasher and short order cook, summer work with the Forest Service, sous chef in Minneapolis and eventual rise to executive chef. At the age of 29, burnt out by long hours and stress, he took a year off and headed to Mexico. It was there, in the remote state of Nayarit, that he experienced an epiphany. He began to see connections between the artwork and culture of the local Huichole people and his own Lakota tradition. Realizing that the Huichole had managed to hang on to much of their vibrant pre-European culture through their culinary traditions, Sherman resolved to learn more about the food heritage of his own people.

He set about researching and understanding indigenous North American plants and their culinary purposes. It was a revelation. No longer did he see weeds, but food and medicine. Through research (that included talking to many elders) he found that his ancestors wasted nothing: everything was put to use. Healthy and self-reliant, the tribes were also sovereign over their food systems, maintaining food security through a rich knowledge of the land and its resources.

Sean Sherman went on to found The Sioux Chef, a mission-driven enterprise of indigenous team members. The members include chefs, foragers, ethnobotanists, artists, food preservationists and food lovers.  Sherman writes about indigenous foods and lectures and teaches all over the world on the subject.

The Sioux Chef’s Indigenous Kitchen (winner of the James Beard Foundation Book Award) is intended largely to celebrate the joy of native American cooking: everything from the delight in finding ingredients right outside the kitchen door to producing interesting and healthy dishes without fancy gizmos or tricky techniques. Almost every recipe is accompanied by a little history, legend or explanation of the dish’s significance. Although the book focuses on the Minnesota and Dakota territories, Sherman notes that methods elsewhere do not vary greatly. The book includes contributions by named chefs (partners and guides) from other regions such as Ontario, New Mexico and the Pacific Northwest, who share recipes with roots in Navajo, Muckleshoot and even Inca traditions.

Sherman’s book tells an illuminating story of a culinary culture devoid of items considered staples of European cuisine, such as wheat flour, sugar and dairy. The original American diet is hyperlocal, all-seasonal, high protein, low glycemic and low salt, lacking in high cholesterol animal products. It is largely plant based, with lots of grains, seeds and nuts. It is a diet that connects with nature in the most direct way.

To anyone unfamiliar with native American food, Sherman provides plenty of interesting facts. Flour was not ground from wheat but from corn, acorns, sunflowers, sunchokes and chestnuts. Indeed, the chestnut tree was commonly known as the bread tree. Sunflowers, in addition to flour, also provided most of the cooking oil. In addition, sunflower seeds produce a rich and creamy butter not unlike peanut butter. Without processed sugar, the indigenous cook used maple syrup. And who knew that the maple tree is not the only provider of syrup? Sycamore syrup is slightly lower in sugar content but possesses lovely butterscotch overtones while sugar from branch tips of the Douglas Fir was also used as a sweetener. Interestingly, sweet foods were not desserts (a European convention): the ancestors relied on sweet foods as part of a healthy diet to provide energy, they were not considered an indulgence. In passing Sherman makes the point that chocolate was a bitter or savory drink until the Spanish invaders got their hands on it.

A lexicon of squash describes nine different varieties and their respective tastes, a similar list of beans runs to twenty-two with their distinctive properties. Sherman explains the difference between wild rice (containing twice the protein of brown rice and richer in vitamins than wheat, oats and rye) and cultivated black paddy rice. A wild greens glossary contains twelve plants – including weeds such as dandelion, clover, purslane and lamb’s quarters, habituées of backyards everywhere. One recipe is for wild greens pesto (it includes roasted sunflower seeds in place of pine nuts). Anyone who might question the nutritional properties of these weedy greens may be interested to know that common purslane, for example, has been dubbed a super food with more vitamin E than spinach and loaded with omega 3 fatty acids.

The recipes cover a range from teas and refreshing drinks, such as cedar tea and sumac lemonade, desserts such as hazelnut maple sorbet, to hearty stews and roasts, such as sweet and sour roast goose with autumn squash and cranberries. Although a cookbook containing recipes that include the likes of bear, elk, dried rabbit and antelope might be intimidating, Sherman provides substitutes (e.g., bison, lamb, turkey jerky). Likewise, flavoring ingredients can be substituted, such as pepper for native juniper and lemon juice for staghorn sumac.

The book contains a Resources list, essentially a bibliography for those interested in further exploration of North American indigenous cultures and history.

It is difficult to do full justice to The Sioux Chef’s Indigenous Kitchen. It is many things: one man’s account of his journey of cultural self-discovery, a thoughtful exploration of native American culture and history and a fascinating cookbook containing recipes that are not easily found elsewhere.  With its encouraging accounts of young chefs now embracing old traditions and new projects focused on respect for the old ways, perhaps, most of all, the book is a testament to rediscovered pride and hope for the future. An inclusive culinary future from which we can all benefit.