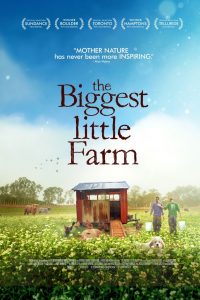 Covering an eight-year struggle to establish John and Molly Chester’s Apricot Lane Farm, nature is filmed up-close in the must-see film, The Biggest Little Farm. With its  profound emotion and a narrative arc that is suspenseful, this winner of Best Documentary at the Boulder Film Festival and the Audience Award for Best Documentary Feature at the Hamptons International Film Festival commands attention to its final moments.

It comes with some surprise that California is as much a home to monocropping and industrial agriculture as the Midwest, with its monocropping of GMO (genetically modified) corn and soybean. When John and Molly Chester trade life in Santa Monica for a dream to farm with nature that would emulate a natural ecosystem, their focus would evolve into bringing dead soil back to life. This was no easy task.

Evidence of an abused agricultural landscape abutted the 200 acres of barren farmland they purchased 40 miles north of Los Angeles and 20 miles east of Ventura in Moorpark, CA. The aerial shot of the California landscape near their farmland shows the ruins of the largest industrial egg operation in America, that at one time had 3.5 million chickens producing 2 million eggs daily, but had gone bankrupt; an industrial agricultural operation consisting of miles of red raspberries under hoop houses; and orchards growing only lemons and avocados.

The way they would transform their land was outside the industrial agricultural norm. They would be guided by Alan York, not merely a consultant for traditional farming, but a very wise man. His telling words (which are puzzling at first), Never enough time to do it right, but aways enough time to do it over, undergirded his plan to create a farm with the highest level of biodiversity possible. He provided the support John and Molly required to slow down and carefully observe. And by examining closely their farm’s ecosystem, they learned how to solve what seemed to be dire, unfixable problems in a way that would create and sustain the richness of the land they worked hard to transform.

This viewer will never forget the graphic filming of Emma the sow, giving birth to her 17 piglets and her struggle to survive (which makes the travails of Disney’s Dumbo seem minor). John Chester’s anguished efforts to effectively treat Emma’s mastitis and dangerously high temperature demonstrated dramatically his own transformation from a film cinematographer into a farmer par excellence.

The up-close depiction of thousands of snails covering the farm’s hundreds of fruit trees has the viewer pondering how do you fix this pestilence without poisonous pesticides. And then there is the stunning cinematography showing mother nature at her best, for example, hummingbirds feeding their young.

It’s not ruining the pleasure of the film to reveal that the Chesters’ Apricot Lane Farm was a Pygmalion-like dream come true with pigs, goats, sheep, chickens, ducks, guinea hens, horses, highland cattle, and one brown swiss dairy cow named “Maggie,” a vegetable garden, pastures, and over 75 varieties of stone fruit including Biodynamic Certified avocado and lemon orchards.

You don’t have to be part of the good food movement or participate in a CSA farm share program to appreciate The Biggest Little Farm, but I have a hunch once you see this film, you’ll become, at the least, much more mindful of the food on your plate. As we emphasize in our own mission statement, in the words of the Kentucky farmer and writer, Wendell Berry, “Every time you make a decision about food, you are farming by proxy,” The Art of the Commonplace, edited by Norman Wirzba (Berkeley, CA, Counterpoint, 2003).

Information is available to organize your own private in-theater screening for your school, church, company or organization to view the film together.