That’s Not Fair! Emma Tenayuca’s struggle for justice/ No Es Justo! La lucha de Emma Tenayuca por la justicia (Wings Press, San Antonio, Texas, 2008) by Carmen Tafolla and Sheryl Teneyuca (illustrated by Terry Ybañez) and Amelia’s Road (Lee & Low Books, Inc., New York, NY, 1993) by Linda Jacobs Altman (illustrated by Enrique O. Sanchez) are two timely children’s books despite the passing years since they were first published: 26 years in the case of Amelia’s Road, and 11 years for That’s Not Fair! These stories peer into the lives and struggles of migrant farmworkers who harvest and process the bounty of American farms and laborers in a pecan shelling factory.

Amelia’s Road and That’s Not Fair! create empathy and understanding for migrant farmworker families and immigrant laborers at a moment when they are threatened by fear mongering. Butterflies, bulldozers and barbed wire worry many opposed to spending billions of dollars on a concrete border wall as headlined in a recent New York Times report. Most unnerving is the dehumanization of our fellow humans seeking a better life. These two children’s book help to shed the light of hope when there is much despair and darkness.

That’s Not Fair!/No Es Justo! is a wonderfully designed book with English and Spanish on the same page. Written for upper grade school aged children, it vividly describes the life of Emma Tenayuca, a Mexican-American born in San Antonio, Texas, who became an activist in the 1930s as a teenager and as a young woman in 1938 helped to organize 12,000 pecan shellers to strike for higher wages.

The story is told from the perspective of Emma Tenayuca as a young girl, teenager and then a young woman, as she witnesses the experiences of injustice in her community. She develops the courage to work to change an exploitative system. 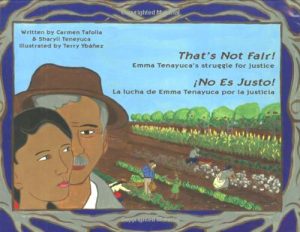 With flashing eyes, young Emma observes a family conned out of a season’s pay and a mother with little to eat and no way to clothe her crying child. And Emma laments how her young friend Maria had to skip school to work in the fields, missing out on learning how to read. Maria tells her: I don’t know how to read. Last year, I was starting to learn the letters. But then, the weather began to warm . . . and my family had to go far away, to pick onions. We picked onions, then strawberries. We picked cabbage, then cotton. We picked beets, then corn. By the time we came back, school had ended . . .

But Emma’s grandfather has wise advice: Sometimes things are not fair. But still, each one of us can usually do something about it, even if it’s just a little thing. These inspiriting words counter an apathetic response of it’s just the way it is, always has been and always will be. Carmen Tafolla’s story reinforces hope for change through action.

For even younger readers, Amelia’s Road spotlights the hard life of migrant farmworkers as seen through the eyes of little Amelia Luisa Martinez. Amelia hates roads because they lead to the cabins of impoverished farmworkers, the only type of home she has come to know. She dreams of having a house that is white and tidy, with blue shutters at the windows and a fine old shade tree growing in the yard. Her aspiration is to have a home where her family can stay in one place instead of following the crop harvests. Amelia’s poignant story is well-told and artfully illustrated while realistically describing the pressures of living as a child of migrant farmworkers.

Amelia is up early from 5:00AM to 8:00AM to partake in a strenuous apple harvest, then she is off to a school for the few weeks her family is harvesting the apple crop, before they all move on to a different harvest in another location. But this time at her temporary school, she has a caring teacher who learns her name and makes her feel worthy.

Amelia has finally found a place that she likes—the teacher is nice, the kids at school are warm and welcoming, and her discovery of an accidental path on the way home from school to her family’s cabin which led her to a special tree. She longs to have a home in this heartfelt story. As her family prepares to move on to the next job in the fields, in another place for another seasonal harvest, Amelia finds a way to keep her dream alive about a better life.

These stories told from the perspective of a young girl and a young woman, Amelia and Emma, humanize a population that has been historically ignored, scapegoated, and even demonized. These two children’s books are highly recommended as a way to appreciate the migrant farmworkers who harvest the apples, strawberries, carrots, lettuce, cabbage…i.e., America’s agricultural  bounty, that would rot in the farm fields without their hard labor.

[Editor’s Note (FWB): These two children’s books are included in a Food Tank list of 12 Children’s Books to Grow Future Leaders compiled by writers Katherine Walla and Hayly Hoch that will educate and inspire future eaters, food producers, and innovators. Also to be noted: co-author Sheryl Teneyuca (with Carmen Tafolla) of That’s Not Fair! is the niece of Emma Tenayuca but spells her surname with an e instead of an a.]