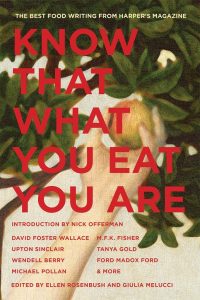 For half a century or so, our informal but most effective agricultural policy has been to eat as much, as effortlessly, as thoughtlessly, and as cheaply as we can, and to hell with whatever else may be involved.

That’s from Wendell Berry’s 2009 essay The Necessity of Agriculture, an eloquent plea for a renascence of farm work as a non-corporate pursuit. He notes that in Goethe’s Faust, Mephistopheles offers Faust two methods for keeping young – swallow a noxious-smelling witch’s brew, or take up farming . . . though now, for Goethe’s witchcraft, we would properly substitute industrial farming.

That’s one of two Berry essays collected in Know That What You Eat You Are, The Best Food Writing From Harper’s Magazine, edited by Ellen Rosebush and Giulia Melucci (Franklin Square Press, a division of Harper’s Magazine, New York, NY 2017), a compendium of food writing from Harper’s Magazine, 27 pieces that appeared between 1859 and 2017, the bulk of them charting our relationship with food throughout the 20th century. Given the amount of fine writing to choose from, these are the best of the best, and reflect a joyful variety of subjects and styles.

Not surprisingly, the longer essays deal with the more controversial subjects: thus are we introduced at the start to The Quinoa Quarrel by Lisa M. Hamilton, whose 2014 piece won a James Beard Foundation Journalism Award. Do you really want to read about the politics of a trendy grain? You do. It’s an alarming piece, emblematic of the conflict between small producers and corporate interests, in this case between farmers in South America’s Altiplano region (Bolivia is smack in the center), where quinoa is grown and guarded, and those who see big money in spreading those crops around. Farmers in Altiplano control the germplasm, to the enrichment of their impoverished nations. They have no interest in further impoverishing an already poor part of the world.

Throughout the book, we’re presented with many politically charged points of view, Berry’s pieces among them; we also get to catch our breath with contrasting works. Like the 1948 visit to a manufacturing facility near White Plains, NY, where a new snack food called fritos are being made, or Alexander Theroux’s The Candy Man, a passionate paean to candy (he hates Valentine candy hearts most of all, the winner- on both an aesthetic and a gustatory level of the most abominable tasting, and must be reveling in their current unavailability), or Ticket to the Fair, a 1994 David Foster Wallace tour of fairground fare, including tall Kaopectate-colored shacks that sell Illinois Dairy Council milk shakes for an off-the-scale $2.50. And pork rinds and hot dogs and popcorn galore. This is the Midwest: no nachos, no chili, no Evian, nothing Cajun. But holy mackerel, are there sweets: fried dough, black walnut taffy, fiddlesticks, hot Crackerjack.

How do we decide what to eat? How have those preferences changed? An excerpt from the anonymous 1859 essay A Cosmopolite Bill of Fare suggests, It is a most notable fact the most civilized nations are the most liberal in their gastronomic taste. But this doesn’t turn into predictable partisanship. Next to the Chinese, whose ultra civilization has betrayed them into toleration of half-hatched eggs, shark’s fins, and bird’s-nest soups, comes the Frenchman; and to him follows the American.

Meanwhile, M.F.K. Fisher, the doyenne of culinary essayists, provides The Social Status of a Vegetable (1939), noting the unaccountable food antipathies that a misguided sense of social superiority can engender – a delightful series of brief observations that leads to a well-earned topper involving wieners and sauerkraut.

The arrival of the microwave oven was a watershed, radically changing our cooking and eating habits; Erik Larson’s 1988 Brave New Foods looks at what we now know was a brief period when it was feared that microwavable fare would take over the supermarket shelves.

Such pieces allow us to assimilate the more sober studies. How Now, Drugged Cow? looks at the threat of bovine growth hormone injections to the dairy herds of Vermont. Tony Hiss found that, by 1994, dairy farming in that most dairy-centric state had decreased dramatically as the factory farms elsewhere took over the market, and Monsanto’s Posilac (as its BGH was monikered) was supposed to be the salvation. This was the time when the University of Vermont was known as the University of Monsanto, supporting as it did the corrupt research that was supposed to assure farmers of the drug’s safety. (The university has since distanced itself from the company, due to activist pressure.) The controversy led the state to pass a law requiring milk from BGH-treated cows to be so-labeled; the law soon was overturned, but led to individual dairies and retailers to label milk that’s BGH-free.

Most compelling is Deb Olin Unferth’s Cage Wars (2014), in which she visits a Michigan egg farm – a massive egg farm – that has introduced what is termed the enriched cage system, putting hens in cages that allow slightly more room (they’re 12 feet by four feet and fit 75 hens apiece). In the context of the insightful history Unferth provides, it’s a very small step indeed, yet it is a step toward more humane conditions in what’s a brutal industry indeed – one we passively encourage with each omelet we consume.

There’s a cumulative effect to this book. Each essay asks us to consider the food we eat, and often shows us the source of such food. It’s no accident that Berry’s 1991 essay Know That What You Eat You Are gives the collection its title, and Berry, in his plea for more know where your food comes from awareness, rephrases a phrase that first appeared (as far as anyone can tell) in a meat-market ad in a Bridgeport, Conn., newspaper in 1923, that stated, in part, Ninety per cent of the diseases known to man are caused by cheap foodstuffs. You are what you eat. Echoing Brillat-Savarin’s challenge, from 1826: Tell me what you eat and I will tell you what you are.

But this is also a book with practical advice. I note especially Upton Sinclair’s My Anti-Headache Diet (1963), in which he laments the indigestion and headaches that dogged him for much of his life. He fell under the thrall of such mountebanks as Bernarr Macfadden and John Harvey Kellogg, to no avail, and discovered only in old age a diet of brown rice and fresh fruit that proved salubrious.

And then there’s the most inspiring piece in the book: Wild Mushrooms without Fear, in which James Nathan Miller teaches us to identify three delicious mushrooms, including the easy-to-find Morel, while also sharing the thrilling details of the death you will suffer upon mistakenly consuming the insidious Amanita. He writes with such exuberance that I am inspired, once the upstate New York winter ends and the Mohawk Valley ground favors the mushroom’s mycelium production, to be out there collecting the stuff. I will become the mushroom.