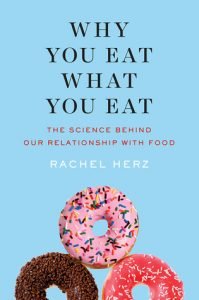 You’d think it has much to do with flavor, this diet of ours. It turns out we’re making choices based on an amazing range of factors, including the color and size of the plate on which our food is served and the volume and tempo of the music that might be coming at us.

Rachel Herz’s book Why You Eat What You Eat, The Science Behind Our Relationship With Food (W.W. Norton & Co., New York, NY 2018) examines not only the actions and reactions that go on within us but also how we’re influenced by a huge variety of signals from around us. People will eat more Hershey’s Kisses – 46 percent more, in one study – when they’re presented in clear jars, as opposed to opaque containers. The moral: put your candy in ceramic jars and wrap your sandwiches in aluminum foil, she writes.

And the color preferences we associate with food extend to how the food is presented or plated, which is due to the associations that we have learned between color and temperature. Red, yellow, and orange are ‘warm’ colors. Blue and white are ‘cold’ colors. Red makes food taste sweeter, yet it’s also understood as a color of warning. In a fascinating study, people were seen to eat half as many pretzels served on a red plate as when they were served on blue or white. And even color distribution plays a part: we’ll scarf up fewer M&Ms when they’re presented in a color-segregated array.

Size matters, too. We eat fewer hors d’oeuvres when they’re smaller, and we feel more satisfied finishing a portion presented on a small plate than when the same portion appears on one that’s larger.

Many such observations propel the book, which unfolds in a carefully planned sequence that begins with matters of flavor and taste. Thus, we learn that we have taste receptors in our lungs, pancreas, stomach, and liver. And nose. But we actually register the flavor of something with the receptors on the tongue and the throat and the roof of the mouth. But don’t keep believing that fiction about different parts of the tongue being geared to different tastes: it turns out (well; it’s been known for decades) that the tongue tastes whatever it’s going to taste on all of its many thousands of buds – except for a line in the center. It’s the brain that segregates the processing of that information.

Furthermore, what we fully register are four major sensations: sweet, sour, salty, bitter. Although umami – the savory taste of glutamate – has been vying for inclusion, it doesn’t fully qualify. It’s one of about 20 other mouth sensations that don’t meet the established criteria for taste qualification, chief among which are fat, calcium, and spiciness. Herz devotes a worthy amount of space to each of these tastes, presenting them with both scientific and anecdotal analysis.

And she does so with a prose style that remains engaging throughout, as when she notes that the attraction, for some, of spicy food is based on the fact that pain causes endorphins to be released and therefore chili heads get a little heroin-like high from their exploits. Endorphins. . . are our body’s home-made opioids. The rousing of endorphins is why hot peppers are touted as aphrodisiacs: peppers can make you feel hot and tingly all over.

All we taste are those properties. Flavor is different: It is an illusion – known as the olfactory location illusion – that the flavor of bacon is in our mouth; the aroma that makes bacon bacon, and not cured salmon, is in our nose. And it’s due to the exceptional anatomy of our throat, mouth, and nose that we’re able to combine an aroma with some fundamental taste cues and reckon a foodstuff’s deliciousness.

But we pick up plenty of exterior cues as well. The popularity of crunchy foods points to an aural satisfaction, and if we consume it with up-tempo music in the background, we’ll eat more quickly (and remain oblivious to the reason). Even the heft of a serving container makes a difference. When a portion of yogurt was offered in bowls of three different weights, the sample in the heaviest bowl was judged the best-tasting, possibly associating weight with financial value.

Herz is merciless in her criticism of food purveyors, but she lets the facts do her speaking. We’ll eat more of an item that’s labeled reduced fat without troubling to notice that a serving of reduced-fat Oreos contains 150 calories versus the 160 in its full-fat sibling, and both contain 14 grams of sugar. Packaging proclamations like healthy and fitness (not to mention gourmet) typically end up being manipulative, and packaging artwork recognizes that you’ll eat more cookies if you see more of them pictured.

And what about the comfort factor? On the night of Nov. 8, 2016, as the U.S. Electoral College results tilted toward madness, online food-delivery companies such as GrubHub, DoorDash, Postmates, and Caviar were also seeing orders spike, with high-carb, fatty foods being the most popular. And, Herz notes, sales of alcohol also skyrocketed. While the idea of childhood memory-evoking comfort food has been around for a long time, the term didn’t gain currency until 1977, when it appeared in a Washington Post piece about Southern fare.

Herz’s excellent study reminds us at every page that it’s not enough to know the pedigree of what we’re choosing to eat – we need to be aware of the many ways in which we’re manipulated, whether it be through social custom or market-researched presentation. We were told years ago that you are what you eat. Here’s the way to find out why.

[Editor’s note (FWB): And, of course, for our mindful readers wary of the marketing of food, especially edible food like substances (terminology coined by the real food guru Michael Pollan), how (organically) and where (locally) and when (seasonably) our food is grown and sourced will always be of keen importance, and hopefully such awareness can provide the basis to resist the manipulation of our food choices.]