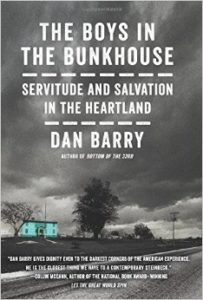 Dozens of men from Texas, with intellectual disabilities (guys with IQs of 60 and 70 in the words of their employer), wound up living for 30 plus years in virtual servitude in the small Iowa town of Atalissa (Muscatine County). They were there, a thousand miles from Texas, in order to provide grossly underpaid labor to a turkey processing plant in the nearby and larger Iowa town of West Liberty (a word that is mightily ironic in this instance). Dan Barry in The Boys in the Bunkhouse, Servitude and Salvation in the Heartland (HarperCollins, New York, NY, 2016) tells a riveting story of these men, called “boys” by nearly everyone in their hard-working lives, in his non-fiction account of rescue and resilience. His powerful and emotional narrative isn’t simply focused on allocating blame but rises to an inspiriting level by finding the light in a tale of much darkness.

The ghastly exploitation of the labor of “the boys in the bunkhouse” began with arguably good intentions to give purpose to the lives of the intellectually disabled, who were mostly institutionalized in Texas state schools in the early 1970s. In Barry’s words, the boys “wanted liberation from state school life.”

Hill Country Farm, Thurman Harley (TH) Johnson’s turkey ranch in Goldthwaite (Mills County) in east Texas, raised thousands of turkey hens. When they grew to be about thirty pounds in about 28 weeks, they were ready for artificial insemination because the top heavy turkey toms would damage the turkey hens during mating and were “not as efficient delivering semen.” In eye-opening detail, Barry describes the laborious procedure from milking the ranch’s toms, “with syringes filling up with semen and ‘extenders,’ a combination of saline solution and nutrients” to the insemination of the hens. The turkey ranch would become successful in training the men from the state schools to expertly assist in this task: “They caught these birds. They milked the ornery toms. They held down the terrified hens.”

The labor of the men from the state schools was especially appreciated as a result of the termination of “a mostly forgotten government arrangement that allowed countless Mexicans to cross the border to work on American farms and ranches” known as the bracero program. The program had been regulated to some degree: “The Mexican guest workers could be hired only during a labor shortage; they could not be used to break strikes; and they had to be provided with decent food and housing, as well as free transportation to the border when their contracts lapsed.” But the program “more than fulfilled its great potential for abuse,” and Barry notes that the former US Department of Labor official who oversaw the program would call it “legalized slavery” explaining its termination in 1964.

In the 1970s, Barry writes that the turkey market was shifting away from east Texas, and TH Johnson and Kenneth Henry decided “the time had come to send the boys of Henry’s Turkey Service out into the wider world, beyond the Texas border.” They had been trained to be “turkey-savvy laborers” at Hill Country Farm and now could be contracted out “to do those high-turnover jobs no one else wanted to do, because the work was hard and low-paying and repetitive, a bloody, filthy, feathery mess.”

Henry’s Turkey Service had its employees “work turkey” in Missouri, Illinois, South Carolina and Iowa, and Barry tells the story of the 31 Henry “boys” who worked in the West Liberty, Iowa turkey processing plant and lived in the “bunkhouse” in Atalissa (whose welcoming sign on the road into the small Iowa town noted “POP. 271 & 2 GRUMPS“).

Dan Barry is a master observer of details and his description of the evisceration process for a turkey on the industrial-style assembly line worked by the “boys” in West Liberty is explicit, and to a reader who is unaware of what goes into “processing” the various turkey products sold in a conventional American supermarket- likely shocking. Barry writes:

As each truck pulls to a stop in the bay, some of the men . . .reach into the crate, grab the forty-pound toms by the legs, and hang them by their feet on V-shaped metal shackles that dangle along an overhead conveyor. . . they fight back with their surprisingly powerful wings. The trick is to grab a foot with one hand, swing that plump body almost behind you, grab the other foot, and hook it.
The conveyor carries the shackled turkey inside the plant to be stunned in a shallow pool of electrically charged water, after which a device slits their throats to make them ‘bleed out.’ The carcasses are then immersed into a vat of scalding water, so hot that fans are needed to at least stir the humid air, and then pass through a series of mechanized rubber fingers to beat away the feathers. A worker called a ‘cutter’ removes the hocks [two hind legs], while others, called ‘pinners,’ pluck away any stubborn feathers.
The birds, fat and pink, plop onto tables, and the evisceration begins. Workers called ‘rehangers’ attach the carcasses by the legs to the shackles of a second conveyor-a critical moment in the process, dictating the pace of the assembly line. A missed shackle means idle moments, lost revenue.
Next in line, the ‘three-pointers.’ These workers grab the tail with one hand, the neck with the other, and put the head in the V of the shackle. Then a cutter slices a hole under the breast.
Once cut, the shackled turkey moves on to the ‘drawers,’ who reach into the carcass to pull down the viscera-the heart, intestines, liver, gizzard, and spleen . . .
A worker with the evocative job title of ‘heart cutter’ grabs the heart, still attached to the viscera, and cuts away the organ and the valve stem with air scissors. The heart is then sent down a pipe to join its visceral mates in the ‘giblet cooler,’ while the valve is thrown in the ‘river,’ the water-fed trough that carries away the offal.
The turkey then swings to the ‘croppers,’ who remove the bird’s feed-filled digestive system. . .
There was a trick to pulling crop- or pulling guts, as it was sometimes called. [One of the boys who became an expert in this task, Henry Wilkins, explains] ‘Take this finger up there, pull the skin apart, take both your fingers up there, pull it straight down. The crop’s out and you throw it in the trough.’ (pp. 88-89).

When Dan Barry saw the news reports in the spring of 2013 about the landmark $240 million judgment for 32 former employees of Henry’s Turkey Service, awarding each of them $7.5 million for emotional harm and punitive damages, he knew he had an extraordinary story to investigate and tell. (The award was the largest in the history of the Equal Employment Opportunity Commission.) No surprise then, that Boys In The Bunkhouse climaxes with a riveting retelling of the trial and the pursuit of justice by government attorney Robert Canino, who invested his body and soul in the litigation.

But Dan Barry does not end his story there. Rather, two of the social workers involved in aiding the men who had worked in the turkey processing plant in Iowa realize that a brother of Carl Wayne Jones, one of the rescued Iowa “boys,” was “still working turkey” at a plant in Newberry, South Carolina. Barry continues his narrative and follows the social workers to “a collosal gray-concrete meatpacking plant operated by Kraft Foods, the owner of the Rich brand.” Through the efforts of the two social workers and the assistance of white hat EEOC lawyer Robert Canino, Leon Jones (the brother of the already rescued Carl Wayne Jones) is removed from the South Carolina “bunkhouse” by county and state officials of that southern state and provided with “proper housing and services,” along with the opening of “several investigations.”

Still, is the story truly over? Out of the corner of his eye, Barry observed “a young man sprawled on a Barcalounger and watching a Spanish-language television program at high volume (emphasis added).” This small detail caught this reader’s attention and brought to mind Eric Schlosser’s Fast Food Nation, the bestseller that was made into a film by Richard Linklater which shined a light on the exploited immigrant labor in the meat packing industry.

In this reviewer’s opinion, the story is never ending and it is fair to place some responsibility on the consumer to know where their food is coming from and how it is being produced. No simple task, but there is one particular way that it can be more easily accomplished: participation as a shareholder in a community supported agriculture (CSA) farm.

It’s with some sense of relief to end this review by noting that the “good food movement” has reached into the small town of Atalissa, Iowa. The Tygrett family’s Oakhill Acres CSA farm is a source for certified organic produce, small grains, herbs, honey and eggs (and is included in this website’s directory of Iowa CSA farms). Atalissans and others in the eastern Iowa county of Muscatine can choose to know where their food comes from and the labor that went into producing it. (And for a turkey this Thanksgiving holiday, Eatwild’s directory of 1,400 pasture-based farms is an excellent resource.)