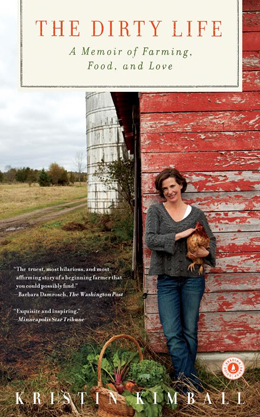 The Dirty Life is Kristin Kimball’s story of discovering the two loves of her life – the love for her future husband, Mark, who she meets while on a journalism assignment, and the love for organic farming, which she unearthed as the couple began to farm together in Essex County in upstate New York. It’s not an easy life, but it’s one that calls to the deepest parts of them.

Before meeting Mark, Kimball lived in New York City, working as a freelance writer. Farming plunged her into a different world:  “Instead of the lights and sounds of the city, I’m surrounded by five hundred acres that are blanketed tonight in mist and clouds, and this farm is a whole world darker and quieter, more beautiful and more brutal than I could have imagined the country to be.”

Driven by Mark’s idealism and determination, the couple develops a plan to offer a full-diet, year-round CSA, providing not just vegetables, but eggs, grains and flours, herbs, maple syrup, meat – beef, pork and chicken — and dairy for their subscribers.

They eschew the use of pesticides, herbicides and fertilizers, feed their cows grass and milk them by hand.  One interesting passage describes the different flavors milk can have, depending on what the dairy cows’ diet was made up of.  It reminded me of Barbara Kingsolver’s description of the difference between store-bought tomatoes and locally-grown tomatoes in her book, Animal, Vegetable, Miracle.

“Milk, like wine, has a serious gout de terroir [taste of the earth],” Kimball writes, “characteristics inextricable from the environment in which it is produced. Most commercial milk comes from cows that never step hoof on pasture while they are lactating. Instead of grass they eat what’s called a TMR – a total mixed ration. It is carefully calibrated to maximize milk production while minimizing cost and might consist of haylage or silage – chopped, preserved fodder – ground with protein boosters like soy or the malted grain left over from brewing. If you think of milk as a commodity, one squirt pretty much the same as any other, then the TMR makes perfect sense. But if you begin to think of milk as a food with seasonal and regional character, the TMR begins to seem as crazy as making wine out of hydroponic grapes.”

[Editor’s note:  Similarly, Rowan Jacobsen in his American Terroir describes the unique taste of extraordinary Vermont maple syrup produced by Paul Limberty’s Happy Hollow, a one-man operation in Huntington (Chittenden County), Vermont.  Happy Hollow has 2000 taps in its maple grove, which constitutes “one of the highest sugar bushes in the world at 2100 feet.”  Mr. Limberty tastes every single barrel of syrup that comes off the wood-fired evaporator, jots down a few tasting notes in his log, and when he hits a batch especially excellent it becomes his certified organic Private Reserve line.  In Mr. Jacobsen’s eloquent words, a bottle of this maple syrup, called Dragonfly Sugarworks’ Private Reserve, “contains the essence of the life force of a single day in a high mountain maple grove.” (FWB)]

As much as the book is about farming – the process and hard work of growing food – it’s also about the food itself. The book is peppered with descriptions of sumptuous meals made with organic ingredients: kale with poached eggs, deer liver with homemade bread and a fresh salad, icefish chowder, dandelion greens in winter, the first Thanksgiving dinner Mark makes for Kristin’s family.

“For Mark,” Kimball writes,” food is an expression of love – love of life, and love for the people around him – all the way from seed to table. I think my family could taste how deep his love ran, and between the squash pie and another glass of wine, they decided – even as he talked freely about his desire to live in a money-free economy, in a house without nails – that it was possible, just possible, that I had not come completely unhinged.”

Kimball’s story is also about the transformative power of the land. She goes from a somewhat fit 30-something writer to a gritty farmer, scraping by financially, learning to make butter and cheese, raise, feed and slaughter animals, drive draft horses, and fix things around the farm. Like her relationship with Mark, the journey is not always smooth, but it is (eventually) vastly rewarding.

“As much as you transform the land by farming, farming transforms you,” Kimball writes. “It seeps into your skin along with the dirt that abides permanently in the creases of your thickened hands, the beds of your nails. It asks so much of your body that if you’re not careful it can wreck you as surely as any vice by the time you’re fifty, when you wake up and find yourself with ruined knees and dysfunctional shoulders, deaf from the constant clank and rattle of your machinery, and broke to boot. But farming takes root in you and crowds out other endeavors, makes them seem paltry. Your acres become a world. … A farm asks, and if you don’t give enough, the primordial forces of death and wildness will overrun you. So naturally you give, and then you give some more, and then you give to the point of breaking, and then and only then it gives back, so bountifully it overfills not only your root cellar but also that parched and weedy little patch we call the soul.”

Spoiler alert: The Essex Farm is still in business. At the time the book was written, Kimball and her husband fed 100 people. Today, according to Kimball’s website, they have 222 subscribers and the farm has grown to 600 acres. They have 15 solar panels, nine draft horses, 10 full-time farmers and three tractors.  In 2014, the membership cost $3700 per year for the first adult, $3300 for the second adult, with a $400 discount for each additional adult. Children over 3 are $120 per year of age. Every member of a household must be a member.

You can read more about Kristin Kimball and the Essex Farm at www.kristinkimball.com/.

[Editor’s Note: The full-diet, year-round CSA offered by Essex Farm is an affordable way for a consumer to have an organic diet and provides a convincing basis to counter the complaint that organic is too expensive, which is stressed over and over by policy makers backed by industrial food producers as a defense of “no holds-bar” commodity agriculture.  The cost of approximately $70 each week for the Essex Farm (full-diet, year round) high-quality foods suggests that the $20 billion the United States now provides in agricultural subsidies could be much better spent to subsidize shares in CSA farms.   Further, as a closing note, a profile of Ms. Kimball, An Unexpected Farmer, by Christine S. An, published in Harvard Magazine (October, 2010), quoting Kimball’s words that she has unexpectedly discovered  “an awfully good way to live” demonstrates the praiseworthy values of Drew Gilpin Faust, the current President of Harvard University, who, in a letter to the New York Times (Feb. 15, 2013), wrote:
“When I speak with students today, I encourage them to pursue those interests that enable them to make their particular contribution to the world.  A graduate working to begin a start-up or one pursuing a career in the creative arts [and might I add- a hard-working farmer who cares about the long-term health of her land and the people she feeds]  would likely not score high on the proposed federal scale of educational worth.  Nor would the nearly 20 percent of our graduates who each year apply to Teach for America . . . .  Equating the value of education with the size of a first paycheck badly distorts broader principles and commitments essential to our society and our future.” (FWB)]