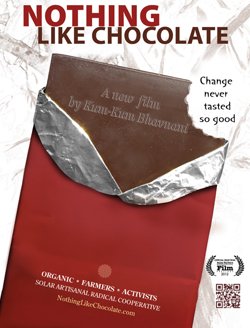 Nothing Like CHOCOLATE, a documentary film directed by Kum-Kum Bhavnani (68 minutes) [Mirror and Hammer Films, 2013]

This past June, the untimely death of Mott Green, the founder of The Grenada Chocolate Company, saddened chocolate aficionados who were aware of his mission to create a chocolate company that went beyond simply carrying a Fair Trade certification on its tasty bars.  In this age of commodity chocolate where traders “gamble” at their computers on the ups and downs of the price on thousands of tons of cocoa (also called cacao) beans, Mr. Green sought another path in life.  A native New Yorker and son of a physician and a psychologist, Mott Green put down his roots in the island of Grenada and in the words of the film’s director, Kum-Kum Bhavnan, began “a chocolate revolution.”

Nutmeg, bananas, citrus and cocoa can be grown successfully on Grenada, but farmers who grow these crops throughout the tropical world (and especially cocoa in West Africa, notably Ivory Coast) are commonly not fairly compensated for their labor.  Mott Green’s idea was to create a cooperative of organic cocoa farmers on Grenada, with the beans transformed into chocolate bars in “the world’s smallest” chocolate factory on the island near where the beans were grown.  This artisinal Caribbean chocolate would then be marketed and sold to consumers who “pay attention to labor and not just chemicals” in their chocolate (in the words of Michael Pollan [interviewed in the film]). The Grenada Chocolate Company’s truly “transparent supply chain from farmer to consumer” with fair compensation for the farmers would have a special place in the marketplace.  The film shows that even as Mr. Green struggled to establish his chocolate business, his company paid the cooperative farmers who were cultivating cocoa on 200 acres, organically with no chemicals, a price nearly double the price paid by the conventional market operated by the government of Grenada.

The filmmaker, Kum-Kum Bhavnani, found a kindred soul in Mott Green in their shared desire to find an alternative to industrial chocolate “entrenched in enslaved child labor (in West Africa’s Ivory Coast), irresponsible corporate greed, and tasteless, synthetic products.”  According to a recent article on 7/22/13 in the Christian Science Monitor,  “Feeding Chocolate Lovers at Low, or No, Wage”, by journalist Kelsey Timmerman, more than 50 percent of cocoa beans used in America comes from the Ivory Coast.  Bhavnani’s film includes video shot by the BBC’s Humphrey Hawksley of Somali children who were sold by their parents to work on Ivory Coast plantations.  With the accidental death of Mr. Green while working on solar powered machinery this past summer, Nothing Like CHOCOLATE has become a powerful and moving memorial to a unique man who was aware, in his own words, of his somewhat awkward place as a “white person in a black country” and who carefully avoided the role of a “chocolate missionary.”

Bhavani’s keen and perceptive narrative includes passionate advocacy for an agriculture that is not just about making money but instead treats labor with dignity (with commentary by Democracy Now’s  Christian Parenti, Prof. David Presti of the University of California, Berkeley, and Vandana Shiva, an environmental activist and founder of  the Navdanya Research Foundation for Science which has been instrumental in the conservation of “more than 5000 crop varieties” in India).  The fast-moving film also provides an excellent visual depiction of how chocolate is produced from wet cacao beans (grown and harvested by farmers), then dried, fermented, roasted, grinded and turned into cocoa liqueur, which is molded into bars as it cools.  The staggeringly complex nature of cocoa on the molecular level, with its hundreds of chemical molecules, is presented concisely by Prof. Presti.  Chocolatier Maya Shoop-Rutter of Chocolate Maya of Santa Barbara provides an historical context for chocolate as a “Food of the Gods” reaching back to the ancient Mayan people, and chocolate maker John Scharffenberger of Scharffen Berger Chocolate in San Francisco (where Mott Green and his partner Doug Brown learned to make chocolate) provides some context for Mott Green’s vision of making chocolate in Grenada where the cocoa beans are grown.  But it is the spooky knowledge of Mott Green’s untimely death, and the film’s honest depiction of his surprising life on a Caribbean island, which transforms Nothing Like CHOCOLATE into an unforgettable documentary.

Mr. Green candidly describes himself as an atheist in a riveting moment in the film to Nelice Stewart, a Grenadian farmer who becomes one of The Grenada Chocolate Company’s cooperative farmers at the end of the film.  Mrs. Stewart is a devout Christian (and mother of seven children) with an ebullient personality who forges a strong connection with Mott Green even as he professes no faith in a higher power to her.

The most haunting moment in Nothing Like CHOCOLATE occurs when Mott Green displays a piercing awareness of the transient nature of life and his deep fondness (“love” arguably could be used here) for the Grenadians who are his friends and neighbors.  Near the end of Bhavnani’s skillfully edited film, with its clear-voiced narration by actress and activist Susan Sarandon, Mr. Green notes that when you ask a Grenadian how they are, the response has a hint of sadness: “Good for the time” or “Good so far.”  Although there is an undeniable eerieness to watching this distinctive film with the untimely death of Mott Green soon after the film was made, knowing that the Grenada Chocolate Company remains in operation (as a result of Mr. Green’s close partnership with Shadele Nyack Compton’s Belmont Estate) preserves the spirit of hope underpinning the documentary.   Nothing Like CHOCOLATE, which has won Best of the Fest at the Santa Barbara International Film Festival and Best Documentary at Tampa Bay’s Independents Film Festival, deserves a wide audience.