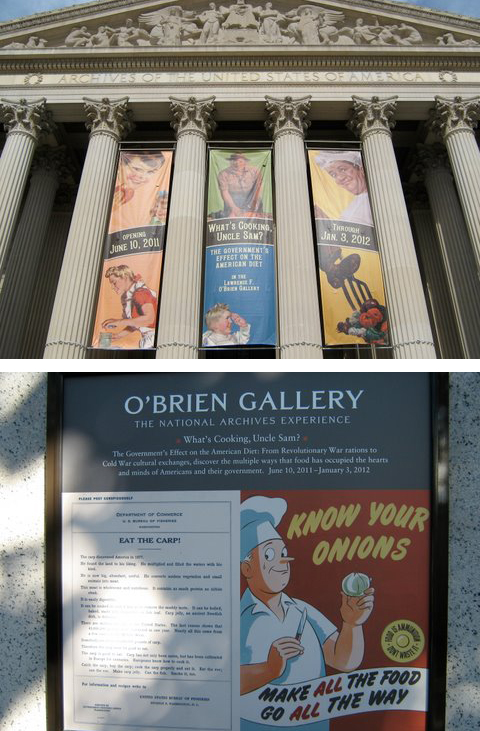 An independent federal agency created in 1934, the National Archives and Records Administration is the national record keeper for the United States.  The agency safeguards records of all three branches (executive, judicial, and legislative) of the federal government.  At its monumental building on the National Mall in Washington, DC, the Declaration of Independence, Constitution of the United States, and Bill of Rights are on display in the majestic Rotunda, with its domed ceiling rising 70 feet above the floor.  In addition, on the west side of the National Archives building is the Lawrence F. O’Brien Gallery, where special exhibitions exploring a topic or theme through records from the National Archives are featured.  The gallery is currently hosting (until January 3, 2012) a popular exhibit on America’s food:  What’s Cooking, Uncle Sam? The Government’s Effect on the American Diet (National Archives, Constitution Avenue between 7th and 9th Streets, NW, Washington, DC , Open Daily, 10:00AM-5:30PM [www.archives.gov/exhibits/whats-cooking/]).  The exhibit is organized into four thematic displays: (1) Farm, (2) Factory, (3) Kitchen and (4) Table.  All four displays reflect the government’s efforts to control, influence and inspire what Americans eat.  This effort to control the American diet is rooted in the public polity of ensuring that the food supply is “ample, safe and nutritious.”

The section of the exhibit on the Farm includes fascinating historical documents concerning the threat of margarine, the “oily imposter,”  to the American dairy industry.  Congress enacted in 1886 the Margarine Act which raised margarine’s price through taxes and licensing with colored margarine taxed at an even higher rate.  During and after World War II, the supply of butter diminished, and federal margarine taxes were finally repealed in 1950.  Mug shots from the late 19th and early 20th century of defendants convicted of “crimes against butter” are fascinating as well as a dairy farmer’s petition from 1886 asking Congress to impose taxes on margarine.  This portion of the exhibit also includes photographs and posters related to the agricultural crisis caused by the Great Depression and the related lessening of demand for farm commodities, which motivated the enactment of a system of price supports and subsidies in 1933 to prevent commodity prices from spiraling further downward.  Photographs and documents from the World War II era show the Government acting to prevent food price inflation by instituting price controls.  The food rationing booklets on display are fascinating.  The O.P.A. (Office of Price Administration) set 1945 ceiling prices in cents as follows: 5 pounds sugar, .32; bread .09; 6 oranges .22; 2 quarts milk, .29; oatmeal .12; and coffee .27.

The section of the exhibit on the Factory includes an eye-opening display of “food frights” including deadly candy and tainted meat.  A 1907 letter from Upton Sinclair to President Teddy Roosevelt  reveals that he intended his momentous book, The Jungle, to inspire labor reform and was disappointed that the public’s focus shifted on to the meatpacking industry: “I aimed at the public’s heart, and by accident I hit it in the stomach.”  Ketchup was one of the first targets of the Pure Food and Drugs Act of 1906.   Records of the Food and Drug Administration show that before the 1906 law, most ketchup was made from fermented tomato cores and skins and dyes to make it red, resulting in a concoction “prone to explode.”

The portion of the exhibit on the Kitchen focuses on government involvement in raising the public’s awareness of good nutrition and includes a large display of photographs and posters from the 1940s when as part of the war effort, the Federal Security Agency addressed “vitamin starvation” and came up with a solution: “Recommended Daily Allowances.”  Posters encouraging backyard gardens and the consumption of fresh fruit and vegetables contributed to the more than 20 million victory gardens planted during World War II [knowwhereyourfoodcomesfrom.com/2011/07/07/victory-gardens-promoted-by-national-wwii-museum/].

The section of the exhibit on the Table includes fascinating documents related to the “presidential palate” from a photograph of President Nixon’s last meal at the White House in 1974 to Lady Bird Johnson’s recipe for Pedernales River chili and menus from presidential state dinners.  Michelle Obama’s praiseworthy efforts to teach school children about healthy eating is reflected in a beautiful photograph of the organic garden established on the grounds of the White House.

If you don’t have the opportunity of seeing this exhibit in person, the Foundation for the National Archives has published a wonderfully illustrated book by the curator, Alice D. Kamps, based on the exhibit: What’s Cooking, Uncle Sam? The Government’s Effect on the American Diet by Alice D. Kamps (The Foundation for the National Archives, Washington, DC, 2011).  It is available for purchase ($19.99) at the Archives Shop and by mail order.   Curator Kamps’ book includes a thoughtful foreword by Chef José Andrés, who was the chief culinary advisor to the exhibit.  His words deserve wide broadcasting:  “This exhibition allows us to plant a little seed, to get youngsters interested in food matters today and create big changes in the future.  Food used the right way can end hunger and help fight obesity and malnutrition.  Food and the right farming practices will create employment and prosperity.  Food when wholesomely grown and prepared can help improve the environment. Food can be the answer.”   [FW Barrie, 12/02/11]